There are many generator rental companies out there today but we pride ourselves as being more than that as we are a solutions provider.

A selection of publications about Primepower from local media outlets.

Use the left menu to filter the publications by period of time. 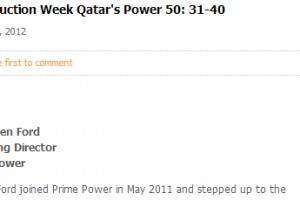 Steven Ford joined Prime Power in May 2011 and stepped up to the role of managing director in June 2012, having worked in the temporary power industry for several years. Given Qatar’s particular point in development, the off grid power generation market is still a crucial part of the construction sector and Prime Power has been able to provide solutions for a number of its leading projects, including Qatarlum, Lusail, the Doha Port, NDIA as well as working in conjunction with the Qatar Foundation.

Ford’s advantage in the market comes from the fact he has lived in Qatar for the majority of his life, allowing an empirical account of the country’s evolution and what is required.

While the headlines will focus on the major infrastructure projects, Ford is well aware of the importance of the Small Medium Enterprise market and has tailored solutions to support both the leviathan projects as well as emerging businesses.

In support of the vision 2030, he has also ensured that sufficient research into alternative energy is being conducted and will be aiming to launch a new range of products into the market in 2013.

With a keen focus on staff development and customer service, Ford is also one of the few members of our power list to be under the age of 30. Representing a new wave of expatriate businessmen, Ford’s fresh outlook on the Qatari market will also stand Prime Power in good stead as the country continues to diversify its needs in the run up to the FIFA World Cup 2022.

Steven Ford joined Prime Power in May 2011 and stepped up to the role of managing director in June 2012.